As you know I have always been a massive fan of Ambush Alley Games and proudly own all their books , after a bit of a break Shaun and Peggy are back and are doing quite a bit in the RPG area but have a new edition of my favourite modern game in the pipeline ,this below is from their face book page :

I’ve received multiple messages from friends of AAG asking about a new version of Force on Force or Tomorrow’s War. As I’ve said before, we have a revised engine completed (other than tinkering with vehicle combat) that we intended to release this year. I’d still like to release it this year, but there are some roadblocks.
Rather than leave you all wondering about what’s going on behind the heavily tinted windows of stately AAG Towers, I think it’s time to share a “State of AAG” address. I encourage you to share this wherever and with whomever you deem appropriate.

Long story made short, I don’t have the financial means to publish a new book and I don’t know when I will. Covers, interior art, and layout aren’t cheap. Even if they were, I doubt I could afford them. I’ve been trying to improve my situation, but current events are making that challenging, to say the least.

The only way forward that I can see for a book containing the new AAG game engine is a Kickstarter. I frankly don’t know if we still have the level of support to successfully pull off a modest Kickstart. I know that the AAG group remains active, has lots of members, and adds more every day, so I think there’s some hope, but I’m not sure.

The book we have in the works contains all the core rules you need to run modern, near future, and science fiction games. If it did well, we’d consider following up with expansions and/or allowing fan-created sourcebooks.

So, I’ve been frank with you guys, now it’s your turn to be frank with me: Would you back a modest Kickstarter to cover the production costs of a new AAG rulebook?

Rangers of ShadowDeep -my heroic band

Finished my Ranger and companions for shadow deep ,actually got into naming them and some background for each of them ,part of the fun of the rule set .all are the official northstar range except Tor&Raven both Footsore and Akmed a Gripping beast plastic arab
More background as they start their adventures

Finished a deployment point for my Jacobites for Sharpes Practice , a Crann Tara or fiery cross a call to the Clans for a meeting . A flags of war piper helps call the clans . 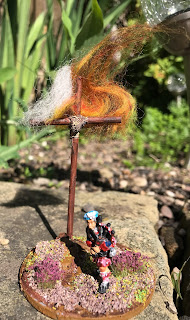 Posted by itchy's wargames at 02:21 No comments:

When we first entered lockdown I never guessed we would be talking months , and I did not realise what a big part of my life wargaming was, the preparation ,painting etc obviously but the social side of it as well ,having suffered from depression previously I might have been in a bit of a dilemma if it had not been for a smallish group of fellow gamers from Sheffield War games Society who took the challenge by the teeth .With great enthusiasm 3  of the guys Tim,Martin and John have put on games each week via skype ,with miniatures laid out ,being moved to our orders and die rolls conducted by the organiser with great success .The games have taken us from the bloody sands of a gladiators arena to the war torn landscapes of Russia ,Greece ,North Africa and France during WW2 and the American Civl War amongst others , with if my memory serves me a minimum of 5 players and a huge game with 8 players fighting an Austro Prussian battle .I am quite proud of being part of this without taking any of the credit for the organisation of these wonderful games. So with my ventures into solo gaming and the massive amount of painting Ive got done ,the lockdown has shown that wargamers can prevail ,I know other groups have done the odd skype type game but to have a different ,entertaining game each week from matrix to miniature games from Ancient Rome to the Falklands is I believe an achievement to be proud of ,Thanks guys for letting me be a part of wargaming history ,which hopefully will enspire others well done.
Posted by itchy's wargames at 22:36 1 comment:

Welcome to Hell-The Battle for Grozny

My Idea for a project to use as display/participation game when shows recommenceafter cover  to help advertise our club,Sheffield war games society has been on my mind for a couple of months and Ive bought some kit ,so will be doing a hopefully regular series on my progress ,play tests and then the shows .The game will be the battle for Grozny in the First Chechin war 1994-96.The Battle was an incredibly bloody affair ,the Russian forces had captured Grozny and set up a large  garrison which a smaller but determined force of Chechen freedom fighters soon put to flight .The Russian armed forces set up a rescue mission and launched a number of armoured columns into Grozny, the defenders fell back which caused the Russian columns to advance too far ,they became mixed up with different units not knowing where to go or what to do .The Chechens launched a number of ambushes taking out the lead and rear vehicles then slowly destroying what was left trapped in the rubble of Grozny .No one knows how many died ,the Russians admit to 62 Tanks ,163 other armoured vehilcles destroyed and 2000 dead ,500 missing and 96 captured soldiers ,no one counted the rebels dead and of course the civilian losses were much ,much more. I will cover the figures ,rules and scenery in future posts so for now some photos of the actual conflict ,some surreal images included .

A bit of a Pig-sty

In my quest for terrain I decided to make a pig sty . I chose the MDF kit from Charlie Foxtrot because I think it will fit in any where and any time from the dark ages to modern ,from America to japan to the UK ,(if there are any purists out there who know i wrong please contact me on " I dont care @stupid mail.com" ,only kidding but I dont really care about secondary terrain  I remember the days at Sheffield wargames society when the 15mm rorkes drift appeared every where except Zululand , if the item is amajor part of the game I try and get it right if possible .The kit itself was really easy to put together and comes with two types of fencing and the little hut and a coupe of bases for your piggys though these arnt included ,mine are warlord plastics.I didnt paint it up as the wood effect looks old and tatty all i did was put some army painter brown flock on the base and a bit of greenery along the outside fence, a really nice ,useful kit at a nice price it will be making afew appeareances in my games. 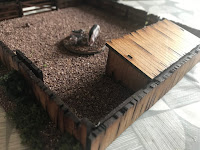 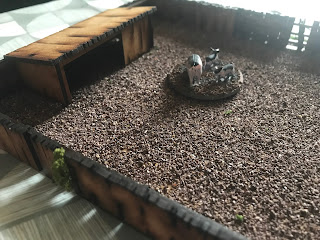 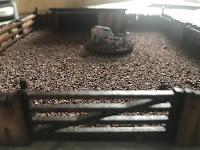 With doing so much solo gaming ,I thought I would take the opportunity to get the Rangers of Shadow Deep a solo or cooperative gaming system ,I bought the delux edition which is not only wonderfully presented book with a feux leather embossed cover and top quality paper ,but also contains all the updates introduced since the game first appeared 2 years ago and the first scenario book released is also include.dhe game is by Joseph A.McCullough the author of the Frostgrave game and is very similier ,if you have played Frostgrave you will know the basics in this game .There are some nice new ideas in this and you dont need many figures plus nearly all the bad guys are from the frostgrave universe so againif you play that you are almost set up for Rangers . The game can be played cooperative or solo and all the included scenarios and missions can be upgraded so you can play them again and again with them becoming more difficult as your heroes become more advanced 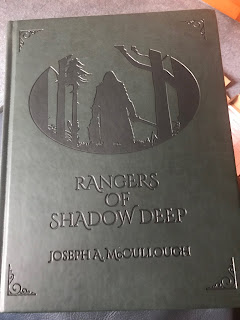 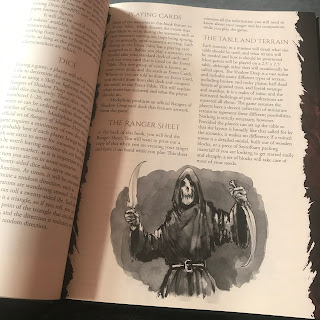 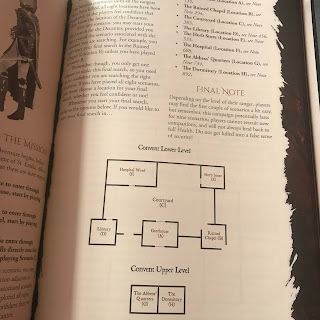 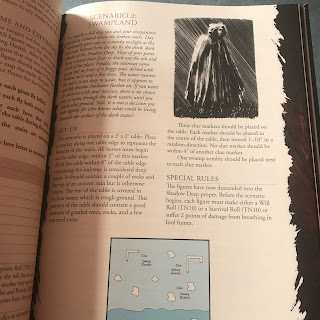 Dont Cry for me -another skype matrix game

Tuesday and Wednesday night was skype gaming with some of the guys from Sheffield Wargames Society .This time Tim Gow put on his Dont Cry for me ,Falklands Game ,brilliant fun with almost an historical (hysterical) outcome .I bumbled through as Pinochet some how managing to stay in one piece and complete my objective. Pictures and a explanation of what went on is covered very well in Tims Blog    http://megablitzandmore.blogspot.com so I will direct you there .

Posted by itchy's wargames at 00:59 No comments: