The Black Effect by Harvey Black

Just finished the second part of the trilogy and its just as gripping as the first part,each chapter dealing with the soviet invasion through the characters we met in Red Effect plus lots of new ones .The battles ,skirmishes and secret missions are all full of action and excitement and are so realistically described again I could not put it down ,lucky for me I was on 12 hour night duty and it was quiet .As I have already said this book brings in new characters and we begin to see how the other NATO and warpact allies might have reacted to a conflict in Europe .Very realistic combat ,briefing and political sections to this fantastic novel leaves you rooting for or hating the people that briefly effect the novel and the wars progress ,I would love to go into more detail but do not want to spoil these brilliant books ,from a war gamers point of view both these books give loads of ideas for one off and campaign games ,now I am sat very impatiently  for Mr Black to finish part  3 then I will move onto his WW2 trilogy . 10/10
Posted by itchy's wargames at 01:59 No comments:

The Red Effect by Harvey Black

One of the many books that santa stored on my Kindle was ,The Red Effect by Harvey Black. This is a must read for anyone even slightly interested in the cold war ,and the what if it had gone hot possibilities .The Author served in military intelligence during this period and has his own blog showing many pictures taken during his time in Berlin ,the Red Effect is the first of a trilogy and deals with the intelligence build up just prior to this fictional conflict . The book is well written and i found it almost impossible to put down ,it builds up at a very fast pace and ends with the first very bloody moments of world war 3 in Europe . The book uses many various characters .soviet and British mainly but also German and American and uses "fictional "politicians such as the female UK Prime Minister and her support of the ex actor who is now the U.S. President to show how Europe very easily the world slides into war . This is a very gripping read and will give war gamers lots of inspiration I have just started reading the second partThe Black Effect. 10/10
Posted by itchy's wargames at 02:38 1 comment:

Just a quick post to say that there are free military books to down load for the next few days at
http://shilka.co.uk/christmas-giveaway/

Available in E-Book .PDF and Mobile app from the 26th to end of the year .
Posted by itchy's wargames at 02:53 No comments:

Just wishing every one a Merry Xmas and hope you had as good a day as I have had . Some new PSC stugs from my youngest son and a kindle with loads of e-books hobby and history related ,including Harvey Blacks Red effect  and Black effect along with his Devils with wings ,just started the Red effect and its a great read . Also on there from my eldest daughter are Chieftains the classic cold war novel ,V Bombers ,The Lightning Boys ,Casino Royal The Complete Tarzan stories and 12 assorted R.L.Stevenson including my all time favourite Treasure Island .Best of All this is my first Christmas Ive not been on duty and had my 3 youngest with me and managed to speak to my 2 eldest and get videos and pics  of my 2 Grandsons now to settle down with a Jack Daniels and watch the Dr Who special with my lovely lady .
Posted by itchy's wargames at 09:31 2 comments:

Rules which ones Rule

I am one of those strange war gamers that buy almost every set of rules that are published covering the periods I am interested in ,but now due to lack of space I am cutting back and will keep the ones I personally think are the best and will sell my overstock in the new year .So what am I keeping and why….


Post ww2 , thats cold war ,Vietnam ,Afghanistan etc .only one contender here and that's Force on Force from Ambush Alley Games , I have played this since the original Ambush Alley pdf and cannot fault it , I own all the supplements even the ones I will never game i just find them all great reads and useful resources . I love these rules ,lots of rule sets have copied the system but have never come close to beating it in my eyes . I have used these on participation games with members of our armed forces who have commented on its realism but how easy it is to learn . Great support as well on the AAG shop and Forum .

Great War I never found a playable set of WW1 rules the ones I tried were either so complicated and dull or you could have been running a game set in any period .Then even though I did not like the look of the rules I tried Through the Mud and the Blood by the too Fat Lardies and now I am a true believer ,I know a lot of people do not like the Blind system of movement and the tongue in cheek way its scenarios are written but I love them . lots of fantastic fan sites out there as well .

Zulu War ,again tried loads with out success until I bought the Triumph and Tragedy colonial wars supplement ,hunt over .These great rules can be played as small skirmish or mass battle ,good support from the authors who have a section on the lead adventure forum .9/10

French Indian War .Always loved this period but never gamed it as I never found the right rules but Muskets and Tomahawks solved this , a brilliant set of rules from the people who did the Saga set again a nice forum for support and can be played solo , I would say only suitable up to large skirmish 50-60 figures per side but thats because of the time involved in moving figures may try a larger full weekend game one day .

Vikings ,Saga are the rules of choice for skirmishes but still not found a large scale game set that i like , forum shared with Muskets and Tomahawks .

Samurai again own loads and never happy ,just bought Ronin by Northstar /osprey and reading through they look good but not played yet .

WW2 …..used to love playing 15mm with the now out of print Overlord ,I think by Barry Lovell .Lost my copy along time ago and played loads of rules since ,Flames of war are awful in my opinion ,didn't like Bolt Action have bought played and liked BattleGroup Overlord but have just bought and played Chain of Command and these are the ones for platoon level actions ,again by the too fat Lardies .

Pulp ,now this ones an issue I have 2 sets that I love Pulp Alley and 7TV one day I will say ones the better set the next day it will be the other . I think 7tv wins out just slightly as its more tongue in cheek and fits in with the 60's and 70's spy films and tv serials ,plus crooked dice the publishers also print a set based on the Harryhausen type epic's such as Sinbad and Jason and the Argonauts and a  set of zombie rules and a set for Dr Who which we play as a family

Sci Fi another hard one and the period I play the least a tie between Tomorrows war by AAG for larger scale battles and PMC2640 by Assault Publishing for smaller / medium games  both well written and again hats of to Shaun and Peggy & co at AAG and Marcin at Assault Publishing ,both excellent sets that make my gaming life harder .

And now a strange one I was fascinated by what I read about Witch Finder General ,a set of supernatural /fantasy rules by Dashing Dice games which are superb at what they were written for , battles with witches ,vampires and other beasties in the ECW period of England's history but they have now got me skirmishing the English Civil War historically , they are the best ,I am looking forward to a promised supplement and as a add on Dashing Dice have just released some figures which are again superb .
10/10 you must try these.

ww2 Air War with out doubt Stormovik Commander from Marcin at Assault Publishing.
10/10

I now have to get together the many rule sets I will be selling off , I will post a list here in case any one is interested .

My challenge to myself to clear my work bench in November was not a massive success I still have loads half painted but these few are almost there just varnish ,matt coat and basing to go . 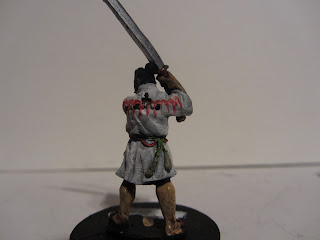 Ronin figures from Northstar Dr who from Heresey and Black Tree Design .
Posted by itchy's wargames at 06:53 No comments: