After my recent FIW challenge ,I ordered a few more packs from galloping Major on wednesday and they arrived on Saturday I didnt expect them being here for a week at best cosidering the Easter Holidays ,well done Lance thank you .
Posted by itchy's wargames at 11:07 No comments:

Day 6 and Ive finished a day ahead of my Target


All the units I need for this weekends game from bare metal to finished to wargames standard (well my standard at least ) , very pleased with the result and the time it took .I will do this again with some more of my lead mountian but now off to the Galloping Major  website to ponder my reward from my lovely Elaine.
Posted by itchy's wargames at 13:01 1 comment:

No pics today ,but had a good painting day ,the 2nd unit of Rangers is finished and I got well into the Hurons and Coureur des Bois ,Hopefully finish these tomorrow get everything thats already finished varnished that leaves me to varnish the last 2 units on the 7th day ..on target :-)

After doing a figure count of FIW figures I didnt need for the upcoming game I have 2 x 6 man ranger units from Galloping Major ,11 indians from Conquest and the Last of the Mohicans pack from conquest to get into .. Really need some more French I think my next order from galloping Major will need to correct this ,but I really love Lances new Provincials ? .
Posted by itchy's wargames at 12:35 1 comment: 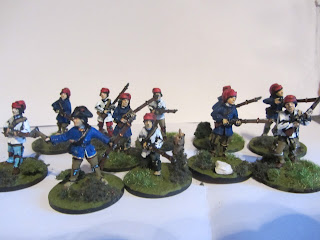 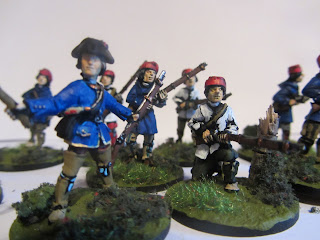 A bit of a manic day today so not as much done as I hoped for ,The 10 man Northstar Marine unit and Officer  finished and based just need to tidy up the bases and then they go into the varnish queue . I have the next Ranger unit to go at which have the block colours done and then the last two french units which at the moment are bare metal ...3days left if I can get the sprayy undercoat out tomorow then I should be ok .
Posted by itchy's wargames at 10:24 2 comments: 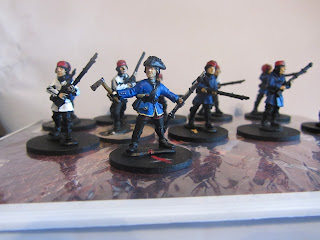 Day 3 has been a bit slow ,I have managed to put a get a lot done to the NorthStar French Marines and put the block colours on the second unit of Galloping Major Rangers ,including Duke Jacobs.Hopefully tomorrow I will have a little more time . 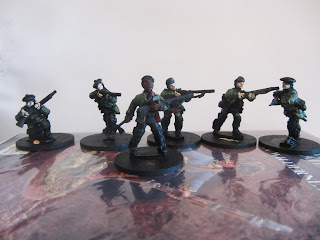 Day 2 was helped by the snow every thing I had planned for this morning was called off so straight into the project.Some figures based but as I undercoat outdoors the snowthat helped today might slow up the progress over the next few days .Started painting the French but cleaning the Northstar stuff also slowed me down ,lots of flash it does come off easy but theres loads of it.
Finished (almost) the first Rangers unit, the Galloping Major figures will be all I will purchase in future ,although I sill have some conquest indians and the Last of the Mohicans pack which I will finish. 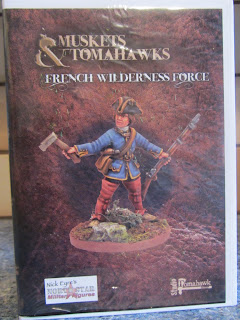 Posted by itchy's wargames at 06:03 No comments:

Having a week off work and lots to do I have set myself a couple of hours a day to pianting /basing figures .I decided to get my French Indian war figures out and instatly lost heart so many in so many different states of completion .So I have got out a selection that when finished will give me a small game of Muskets and Tomahawks ,so I will post pictures every day of my progress ,this hopefully pushing me on ?. Here is the starting line up at end of day 1 ....My Target units are
1 x ranger officer
2 x 6 ranger units
1 x 4 Iroquios British allies
1 x Franches de la marine officer

if possible another ranger unit and officer and another dozen iroquios are in my collection but not needed for the game.

The conquest figures are beutiful but slimmer and smaller than the others but on thicker bases its not too noticable ,Galloping Major and Northstar are almost identicle but the majors figures are better in my opinion.

All Quiet on the Western Front 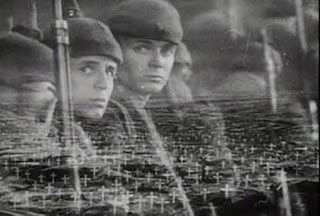 I have always enjoyed watching this movie ,but when I saw the Limited Edition Blu Ray I just had to buy it ,and its a must .The picture is crystal clear as though it was made yesterday the sound is almost perfect ,theres a couple of points in the film where the sound level drops but only for a few seconds .The disc comes in a hardback 36 page book crammed full of information about the film cast and crew and lots of pictures , the extras on the disc  are interesting they include an introduction by Robert Osbourne ,a insight how the film was restored downloads for I-phone and tablets and the full Silent version for the true buffs(the film was one of the first talkies and a silent version was sent out to theatres which still had not upgraded to sound) .
The only real gripe I have is there is no standard menu the film starts and you have to access the extras through a pop up menu during the movie.The film is a true classic and I am sure that everywargamer interested in the period has seen it (NOT THE JOHN BOY VERSION ) ,if not why not, so i wont bother going into the story ,but here is a link to a free  pdf of the original book
http://www.deltasd.bc.ca/bu/Staff/assets/AQOTWF.pdf

If you have a blu Ray player then this is a must ,you see so much more than the grainy TV version seen on sunday afternoon ,the battle scenes are very brutal certain deleated scenes have been restored as well which gives it a 12 certificate in the UK . 10 out of 10

Posted by itchy's wargames at 08:20 No comments:

The Strangers
A group of friends gathered together by Professor Strange, the world’s leading specialist in the occult and paranormal .Ready to smash cults, disprove false haunting or fighting evil Strange and his group have many different ways to win the day from brains and brawn to their own knowledge of the occult.
Professor Adam Strange: Leader
After a military career in the Far East and Northwest frontier he developed an interest in the occult and the supernatural which led him to him becoming the world’s greatest expert in this field. He rejoined the army during the Great War where he met and made a lifelong friendship with Corporal Donkin, who saved his life on more than one occasion. Even though he is now in his older years he can still handle himself he prefers to use brains in his crusade against evil.
H D10  -B 2xD10 – S3xD10 – D-2xD8 – M 2xD8 F 3xD10 – C 3xD10
Wealthy-Shrewd – Danger Sense
Baron Theroux: Sidekick
A mysterious French noble who gives away little of his past, even to his comrades. They know he is wealthy ,has many friends around the globe and most importantly ,he has telekinetic powers ,his mind blast has saved them many times and power over certain enemies has proved more than useful.
Hd8 B2xD6 – S3xD8– D2xD6 – M 2xD6 – F 3xD8 – C 3D8

Simon: Ally
His Family murdered by a strange cult that left him for dead ,he was found by strange ,he now devotes himself to the Strangers hoping one day they meet the cult that changed his life forever
HD6 – B 2xD6 – S2xD6 – D1xD6 - M1xD6 – F1xD6 – C1xD6
Athletic
Donkin: Ally
The Professors devoted batman during the war, was employed by his former officer as a butler, investigator, body guard and general all round sound chap, his military training and street background make him a tough character.
H D6 – B 2xD6 – S2D6 – D 1xD6 – M1D6 – F1xD6 – C1D6
Unstoppable

Posted by itchy's wargames at 02:16 No comments:

Let's all give a big warm welcome to our 2013 Pointmen! Keep an eye out for them at conventions and game stores. If you're interested in becoming a Pointman remember to submit your application!


Glad to be selected again and good luck to all the others ,well done .
Posted by itchy's wargames at 05:09 No comments: 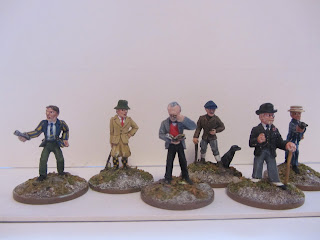 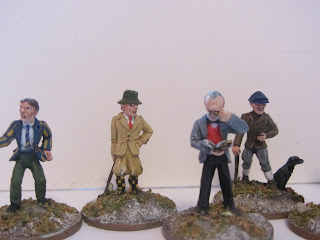 The first of my Pulp Alley Leagues to see action ,a 1920's supernatural investigation team .A full AAR will follow soon. 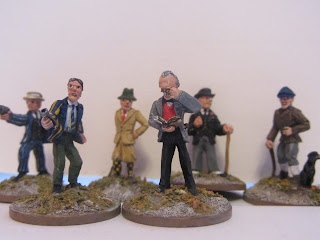 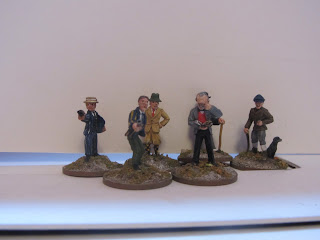 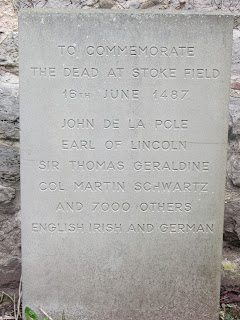 Another chance to visit a battlefield today this time Stoke Field near Newark. The final battle of the Wars of the Roses and a bloody three hours it was. If you go its worth finding the memorial in the Church Yard ,the church its self is easily missed . 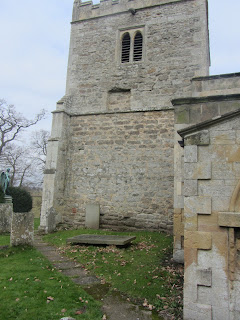 The memorial stone at the base of the church tower 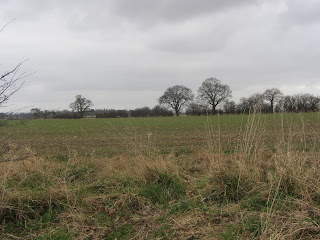 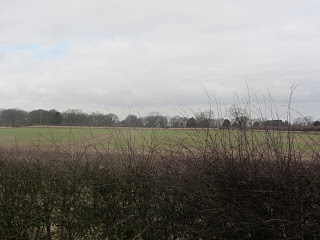 LEFT: In the distance the woods are the "Red Gully" the hoped or escape route for the rebel army ,sadly it is now out of bounds to the public. 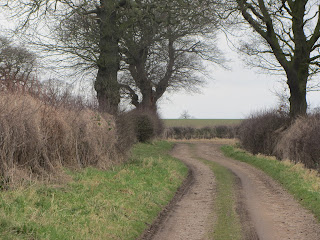 Posted by itchy's wargames at 12:31 No comments: