Another vehicle finished for Bolt action ,this time the Warlord plastic SdKfz 251/10 AusfD. 3.7cm PaK half track that came in the Band of Brothers starter set I recieved at Christmas ,a really nice kit to build and paint with lots of bits to put on as stowage .It comes with choice of either having the gun fitted or having seatsed crew to use as a standard troop carrier it comes on 3 sprues one of which is for the pak 37 and gunner . 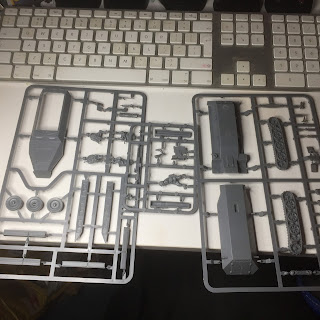 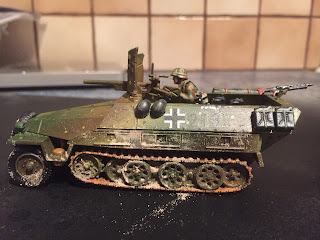 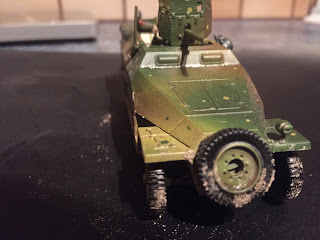 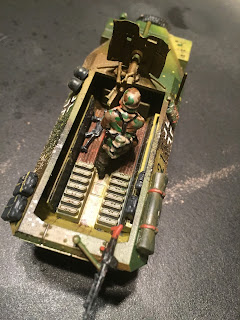 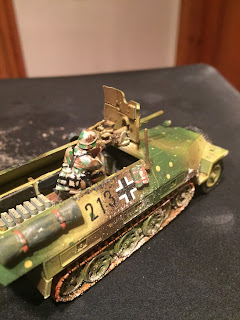 Being a bit eager to play Bolt action and the game we had arranged to take part in at the club being postponed John and myself dug out some old battered ww2 stuff and did a 500pt game USA v Germans in abattered snowy village it was great fun.
Turn 1
Both sides advanced and tried to get into position the only real actionwas when the US sniper took out one of the Germans MMG crew .

Turn 2
Quite a bit more action but only 1 unlucky GI was taken down butthe pins started piling up .

Turn 3
The blood started flowing 4 Yanks and 2 Germans biting the dust ,pins started to make things harder to do as well.

Lots more firing with 3 dead on both sides ,the germans MMG taking another crew casualty but passing its moral test and causing problems for the nervous GI's.with i unit taking to its heels and leaving their comrades to their fate ,

Turn 6
The end in sight ,another US squad flees the table and the HQ who had proved very effective was wiped out in aflurry of German LMG fire , one good bout of fire from the Yanks was not enough to save the day .A German Victory . 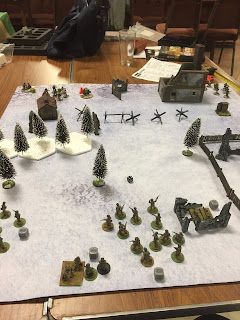 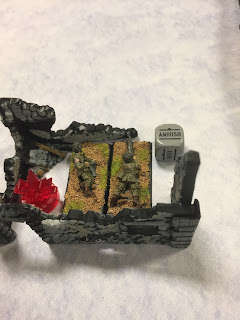 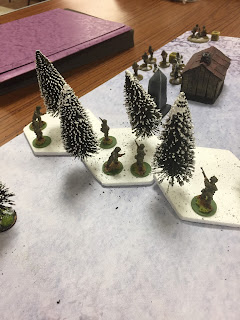 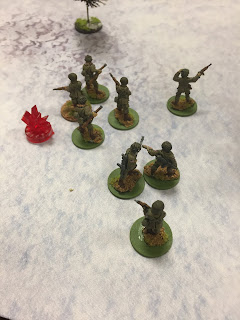 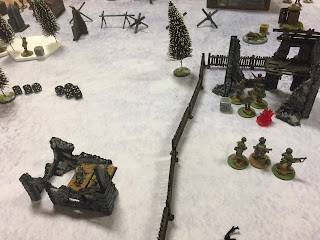 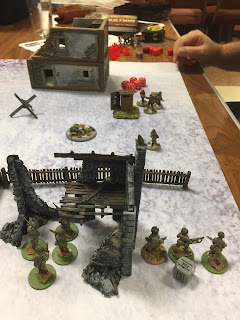 Most of the figures were Artizan ,mat from Urbanmatz and other bits from Various places .
Posted by itchy's wargames at 09:19 No comments: 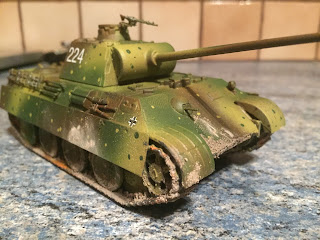 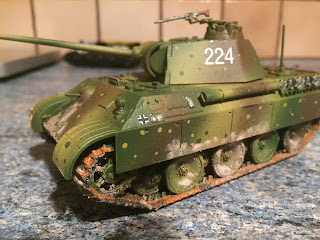 Posted by itchy's wargames at 11:01 No comments:

The latest supplement for 7TV2 arrived over the weekend and its just excellent as expected ,keeping the tongue in cheek aspect going strong the guys at Crooked Dice and have used 1967 as the year of publication .The cover is nice and colourful with 3 minis racing into view (not many people know that ) ,The card cover book is full colour through out  packed with info ,new rules and casts including  Marty's Monster ,The Daredevils and The Girls of St Searles ,ideas on how to customise cards and new rules covering a new campaign system .I also recieved the 1967 card deck which includes all the new and updated casts and vehicles and some new gadget and Rating wars cards . a great addition to the game 10/10 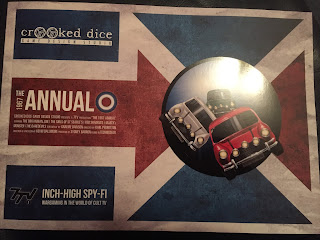 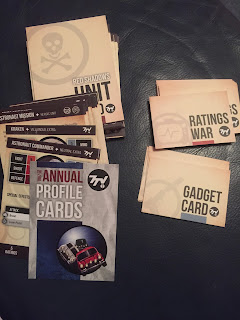 Posted by itchy's wargames at 09:41 No comments: 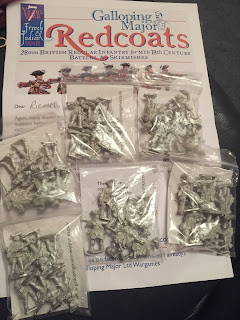 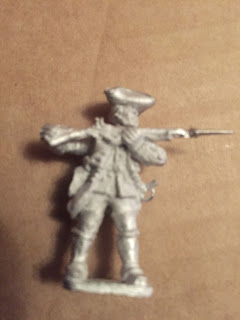 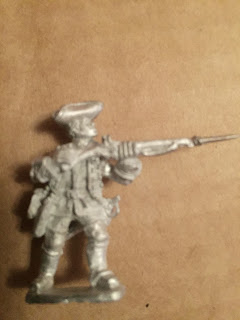 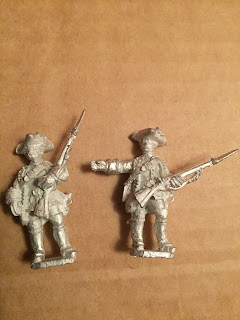 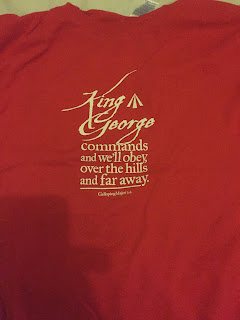 Posted by itchy's wargames at 12:27 No comments:

Last night at the club we played Airways c21 ,a very nice simple air combat game originally designed to use at conventions.Definatley not for those of you that want to simulate how many g's you pull in a dive or how much shrapnel a sindwinder would cause at xxx feet but a really quick fun game with just enough realism for a club game,we had 2 lightnings against 2 mig 21's and the game took about an hour to play to a outcome , nice shiny silver aeroplanes shooting past each other firing very ineffective missiles .Will play again with all the optional rules .

Posted by itchy's wargames at 23:16 No comments:

A little update on my 8th army stuff for Battlegroup Tobruk .

Posted by itchy's wargames at 08:54 No comments:

The Kingdom is ours -Gun

Managed to finish a artillery piece for the ECW .Warlord metal miniatures all come together with the gun and barrels etc. 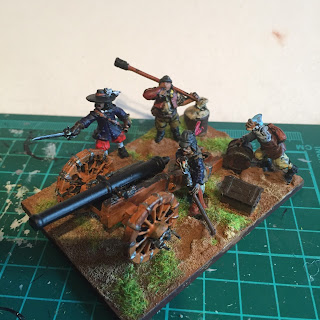 Posted by itchy's wargames at 10:37 No comments:

A few Brit Infantry Ive done as a test  for Bolt Action,late war figures they are Warlord Plastic the decals that came with them I wasnt happy with so bought some from Company B ,they are smaller than the Warlord but easier to get into place and have more detail to them . The figures are very detailed but pigs to put together ,everythings seperate ,arms ,heads helmets weapons ,packs everything but this gives you lots of options possible weapons include thompson or Sten ,Lee Enfields with or Without bayonets or scopes ,Brens ,piats , pistols and 2"Mortors 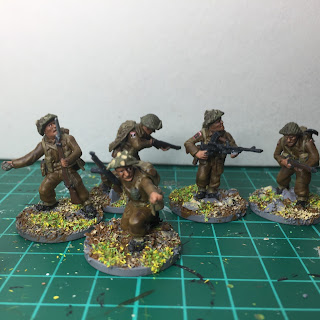 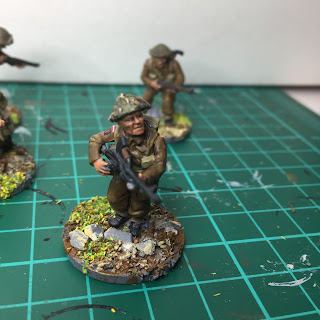 Posted by itchy's wargames at 08:13 No comments: