The Kingdom is Ours

I've been lookingfor a quick play set of rules for the ECW for a while so when I saw these advertised I was interested especially with" the fight a 28mm gam on a 6x4 table in under 3 hours" bit  ,so I bought them .Here is a first impression review of the rules .

THE GOOD BITS
A glossy soft cover set  of rules ,80odd pages in length with lots of colour pics of figures which I presume are all Bicorne .The book consists of the following:

As you can see the rules dont take up all the book theres lots of interesting stuff in there
it all seems at first look very easy to follow and well laid out .
Bicorne sell packs of dice for the rules although any dice will do and they inform me that unit trackers will be available from them soon .
Lots of advanced rules if you want them
A decent price for a rule set these days

orders are issued and turns taken by drawing dice from bag a different colour of die  for each Tercio the bag also contains the Purple dice of doom ,which when drawn ends the turn and may bring other events into action such as units running away

Each sides number of order dice are decided on by the number of units in play at the start of a turn and how many die the commanders gains the bigger the army the harder it is to give orders also the training of the army effects orders ,if aunit is lost the next turn the dice for that unit are no longer included

THE NOT SO GOOD BITS ( in my eyes at first glance )

not many gripes really , the play sheet is in the middle part of the book so is virtually impossible to photocopy without damaging your book ,how ever it states you can download from the Helion site however I could not find it I emailed Helion and did not recieve reply so contacted Bicorne who replied almost immediately saying it was not yet available but they were looking at it .
Only 1 scenario but it is a good one
A couple of bits may annoy other players such as having the bicorne catologue in the book and the use of a protracter for fire arcs but I am pretty happy with my first look  and will be making my armies up to suit .
8/10 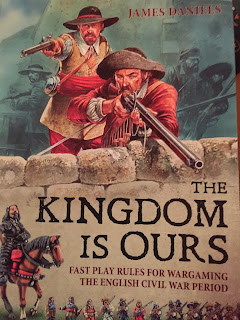