Selling the bolt action bits below : Books £13 each -Dice £12.00 unless stated in  pics all inc uk standard P&P all excellent condition  any reasonable offers and multi buys welcome

Posted by itchy's wargames at 23:56 No comments:

Played this second solo scenario fromthe wizards conclave supplement .This time my group are fast asleep except the wizard when  a large group of night creatures attack them ,a mixed group of skeletons ,ghouls ,zombies ,ice spiders and a snow troll .Having to roll awill roll each turn to wake up my awful die rolls made sure most of my adventurers were sound asleep when the baddies arrived , dreadful encounter I took the better part of valour and teleportedmy wizard away and his followers ran in avery disorderly fashion all taking various wounds to make the next game even harder ,luckily my treasure rolls were quite good and ive got some spare cash to buy a couple of new guys. 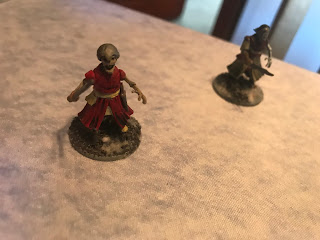 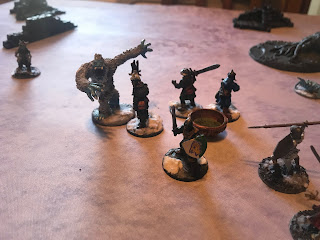 Posted by itchy's wargames at 02:19 No comments:

Another Solo game this time using a solo scenario from the wizards conclave supplement in the Frostgrave setting. Frostgrave has many solo and co-op scenarios in this and the perilous dark books and the spell caster magazines I mentioned in an earlier post . The adventure didnt go as planned lots of bad dice rolling gave the rule generated bad guys the upper hand for most of the game ,but I managed to get away with some treasure and completing the two main objectives ,killing the snow leopard and getting away with the armour of redwar ,although I left my apprentice and 2 soldiers dead in the snow .Great fun as always . Figures mainly Northstar with a few odd ones and treasure from northstar and mantic ,mat  by Urban matz. 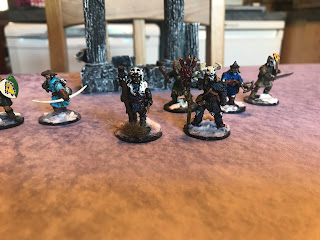 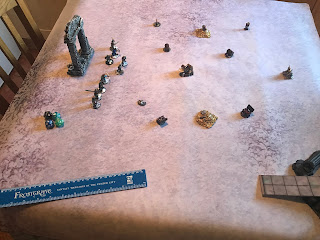 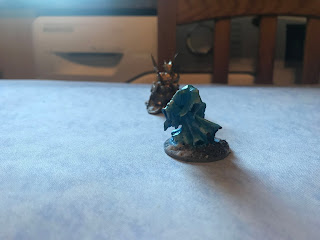 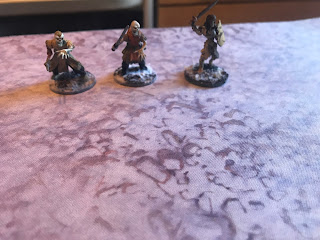 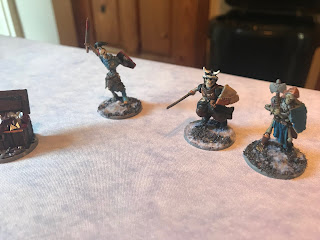 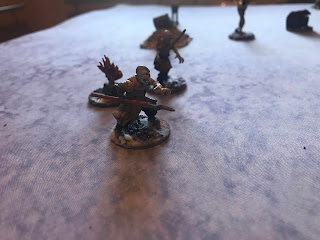 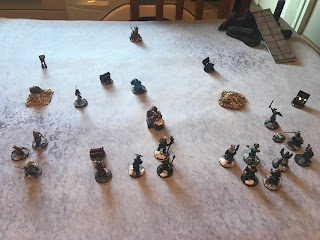 Posted by itchy's wargames at 04:00 No comments:

a couple of Mercenarys -Burrows and Badgers

Painted anpther coupleof the Burrows and badgers kickstarter figures from Oathsworn ,still a few to go and I've added another dozen figures since I recieved the K.S stuff .These 2 are Mercenaries a red kite swooping low over the battle field and a ferret wearing splendid Landsknecht costume .I will never get fed up of painting these amazing figures or playing the game . 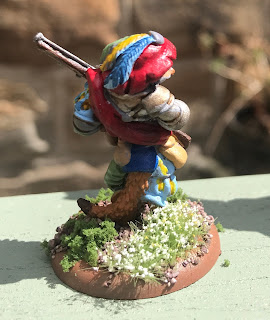 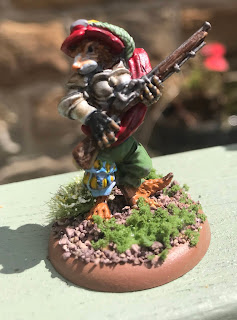 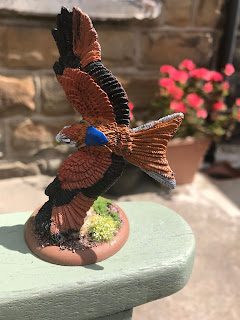 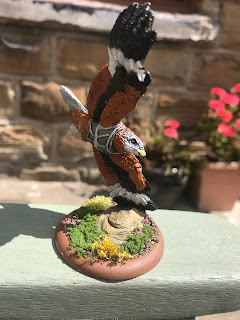 Posted by itchy's wargames at 04:36 No comments:

Im a bit of a late comer to this magazine , A independent publication by Joseph A McCullough the author of the Frostgrave rule set .Spellcaster is avialable through Drive through on line publishers .it comes as a download , or print on demand  you can hac=ve a free download with the printed copy if you wish .I buy the print on demand copies ,it takes between a few days and a coupe of weeks for the maagzines to arrive and I take the free download as well these are great for printing off bits for game use . Each issue contains scenarios and new rules for Frostgrave and Ghost archiepeligo ,plus other bits and pieces associated with the Frostgrave universe , really great art work and articles ,a must for any frostgrave player . 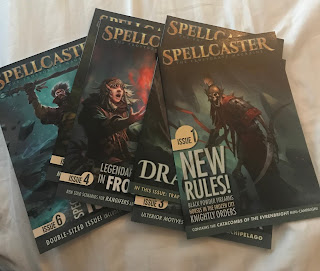 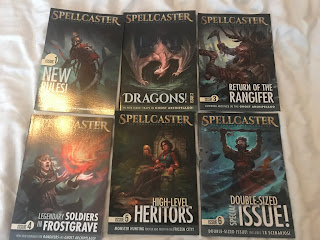 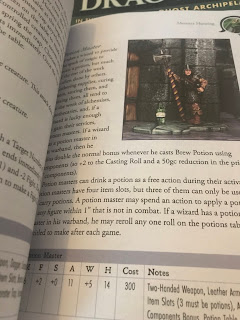 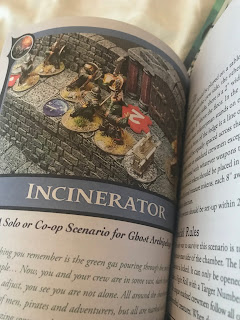 I tried out 3 solo zombie rules add ons ,one after the other ,same scenario same scenery just different figures to suit the rules .You do need the main rules to pay all these
7TV Apocalypse survival horror solo rules
Chose these first just because I knew they would take a bit more organising getting the cards out etc , the rules are free from the Crooked Dice web site and are written to be used with their apocoylpse rule set . I used figures from the Crooked Dice apocalypse range ,the secret base and jail are from Crooked as well ,the mission to search the base  .The game played well ,although my survivors didnt survive long as each time they killed a zombie I rolled for respawned in the same place so the poor humans were soon over powered ,a ault in my die rolls not the games .You only use half the usual number of countdown cards as the zombies dont use them but I ran out of guys before I had turned them all over ,great fun .

Last Days on Earth ,Zombie Apocalypse
This game from Osprey  didnt impress me in normal  play but is alot better in solo mode  just because you get more zombies for your money ,the solo rules are in a supplement called Seasons and are free off the face book page. Again a really good game the humans did a lot better but had to leave the base before anything useful was found . 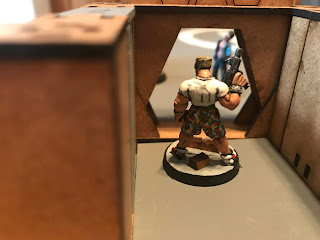 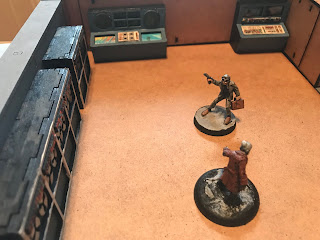 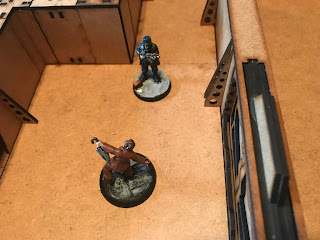 Spectre Operations -Zombie operations
Another freebie from Spectres webstore , another fun set I personally liked this one the best my SAS team kicked ass as well ,although it was a close run thing . 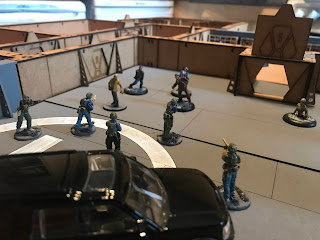 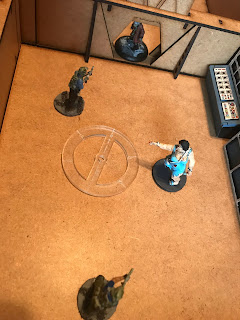 All 3 played well but in my opinion ,spectre was first ,7TV second and last days  er last but really close and all worth playing

Posted by itchy's wargames at 10:28 No comments:

Well we are well into the lockdown ,I am working from home which I enjoyed for the first couple of weeks ,but now the kettle and microwave have started talking back to me Im feeling I need to get back to a normal routine. When this first started my first thoughts were what I would miss most ,contact with family and friends , getting out and long walks and my wargaming ,family and friends have kept in touch with phones ,skype and many other things I didnt know existed ,walking around battlefields, musuems and such like has stopped .Wargaming on the other hand has been quite productive ,lots of building and painting but actual gaminag as well ,without breaking the social distancing rules . First  off some of the guys from Sheffield wargames society set up some great matrix games ,these covered the ww2 and ACW nd were great fun ,these have progressed to actual miniature games were the umpire move the toys for people and perform the dice rolls ,these have covered ww2 and playtest of a gladiator game .The other way I have been wargaming is by playing with my self ,sollo wargaming that is .A couple of my favourite rule sets  already include solo rules ,the men who would be kings by osprey have a really cracking solo system aimed at the colonial period but I am sure they could easily suit other periods I ahve used this system when firt learning the rules and will be using them alot more ,Frostgrave by Osprey and Northstar have solo supplements available and again I have tried these and found them very enjoyable . Last Days on Earth the zombie game again by osprey have a supplement that covers solo play and I must admit i find the solo rules better than the normal ones just because you see more zombie action a game that only sees a maximum of 6 zombies is pretty poor really you do get more zombies for your money with the solo game. Staying with the Zombie genre both Specter Operations and 7TV by crooked dice  have released free zombie rules supplements for their rules,Ive tried the Specter ones and they played well but I have not tried the 7tv as yet but look good ,both are free downloads from the web stores of both companies. Oathsworn have risen to the challenge and released a free set of solo play rules for tgheir Burrows and Badgers rule set and I must admit they are excellent and they have even updated them with more rules and 3 scenarios . I am sure there are alot more solo games or supplements allowing sol play which Ive not played yet ,but overall a very hectic wargaming lockdown but cant wait to get back to the club and some real gaming .
Posted by itchy's wargames at 00:08 No comments: