Dr Who into the Time `vortex more figures

I ordered the already available set Dr Yano and Chanthos , a nice episode , the figures are nice but lots of flash and no cards as yet either , as I ordered over &5 quids worth I was sent the fisher king model as freebie ,quite alarge metal figure which carries the ridiculous price tag of £25 no idea why ,the figures not bad but loads of flash and again no cards but at least you can download them for this guy .

Next set is from the 2nd Doctor era and as usual contains 5 figures 1 cyber controller and 4 cybermen all in different poses ,these are really nice but alot of flash in the most awkward places to clean ,      again all cards are included which is nice as some of the earlier sets did not include them and some are not even available for down load yet .Just waiting for the second Doctor now 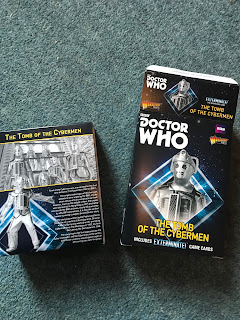 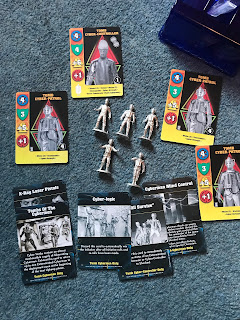 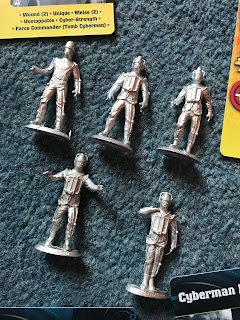 Posted by itchy's wargames at 07:15 No comments:

The Tardis ,the most famous police box in the world , was happy this was released but not so happy when I received it ,not the clenest resin casting I have ever seen , a bit dissapointed that Warlord chose not to have decals for the signage , the main lettering is raised in the resin but the smaller signage on the doors will need to be hand painted ,However the biggest disappointment is the fact it is more like the leaning tower of Pizza than the tardis it has an incredible lean to it and its not the base this is perfectly flat it is the actual casting which is out .I have contacted Warlords Customer service and at the moment have not heard back from them . 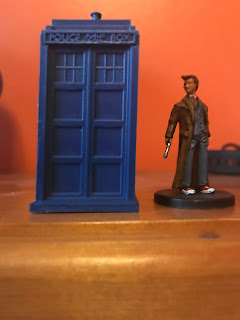 Posted by itchy's wargames at 06:55 No comments:

Dr Who into the Time Vortex ,new releases pt 2 -11th Dr and Companions

As they say ,in no particular order the next set I opened today was the 11th doctor and companions ,Mat Smith was my least favourite Dr and I wasnt too fond of his companiions either . This set include the 11th Dr in a nice pose (again this is the second version ) his missus River Song this is another nice pose , another (2nd ) version of Clara Oswald and Amy Pond and Rory Williams these latter ones are ok but the unoficial and now hard to get crooked dice versions are a lot nicer .Again cards are included. 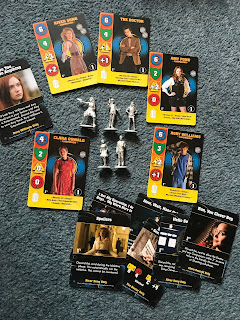 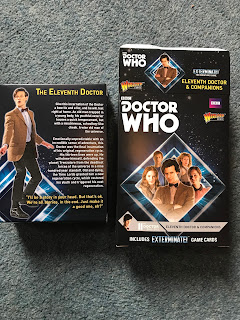 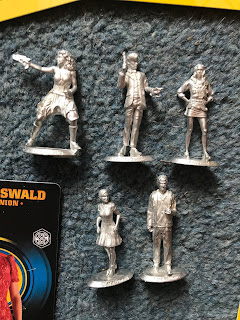 Posted by itchy's wargames at 06:41 No comments:

Had a few items from warlords Dr Who range arrive today most of the are new items so a first look at them , the first is a set depicting the David Tennant episode Voyage of the Damned . The figures are nicely posed ,my favourites so far ,very little flash ,the set contains 5 figures ,the tenth doctor ,Astrid Peth , Bannakaffalatta ? and 2 Heavenly Hosts the latter have seperate wings all the others are one piece castings . Also included a set of cards needed to use all these characters.This is the 3rd version of the 10th Doctor in this fairly new range as I said this set is really nice a lot better than some of the other sets but one of the missing Doctors would have been nicer.

a great fun matrix game at sheffield wargames society last night ,set in the very wild wild west .The game run by Tim Gow using his fantastic collection of toys involved a strange cowboy in a pink shirt , 2 bands of sneaky indians (one of them very sneaky) stage coach hi jackers , bank robbers and avery violent preacher with a even more violent wife , all great fun with some witty arguments ,guest appearances by burt lancaster ,jeff chandler and charles bronson and much more ....by the way noidea what the town was actually called but the name perverts gulch was coined after the antics of the guy in the pink shirt became public ... 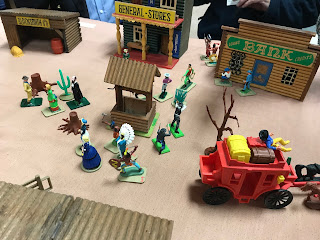 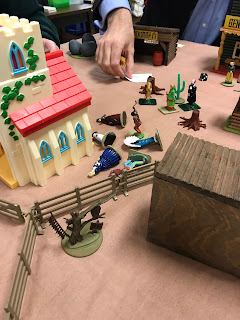 A great ady pretending to be the politburo in 1968 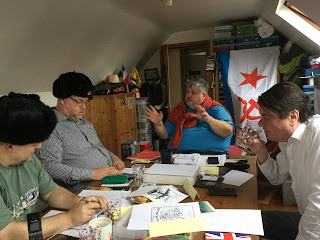 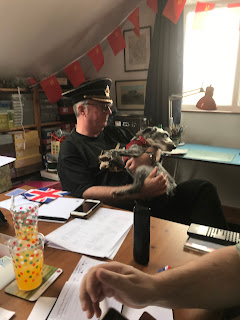 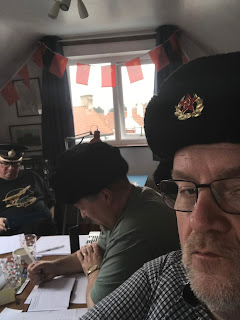 Posted by itchy's wargames at 11:25 No comments:

Doctor Who into the time vortex =first game

I must admit I was pleasantly surprised by this game ,I thought it looked too simple and thought I would be looking at 7 TV or the old free Dr Who game but we quite enjoyed it .For the first game we kept it simple ,using the cybermen and Daleks that come  with the starter game and the first basic scenario . John picked the Cybermen taking the cyberleader which gave him a free cybermat swarm and a 2 and a 3 cyberman patrols so he could get a extra fate token I had the Daleks and took patrol leader and 2 patrols .The Daleks have the shooting advantage or should have by not moving and getting their shooting dice doubled but my awful dice rolls only took out a cybermat stand the entire game ?. The cybermans melee proved the winner taking out my daleks when the underfire tokens started piling up .The Adventure and battle cards gave us acouple of scares or chuckles depending what side you were on ,great fun overall .Next time the `Doctor will make an appearance and then after that will run multi player game at the club.We picked the rules up pretty quickly the only thing is you really need more dice than you get in the starter ,luckily for me John had some extra sets from when he bought up alot of warlord games zombie game last year which uses the same die . 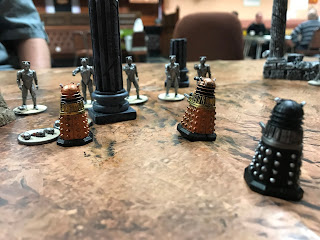 Posted by itchy's wargames at 09:29 No comments:

Andy at AW has just started a small kick starter to expand his extensive samurai range ,as followers will know I like the AW ranges having quite alot of Andys toys in my collections .
https://www.kickstarter.com/projects/1615843621/release-the-monks

Posted by itchy's wargames at 11:48 No comments:

Doctor Who into the time vortex -W.I.P

After promising to run a game of Warlords new Dr Who game this coming wednesday so today painted enough forces for the 1st scenario ,Daleks v Cybermen . The models are plastic from the starter set ,the cybermen fit together better than the Daleks but built and painted 9 cybermen ,2 stands of cybermats and 7 Daleks in under 6 hours ,so cant grumble . Just need to finish basing the cybermen and varnish them all .Will do a write up after the game .

Posted by itchy's wargames at 10:44 No comments:

Another look at the rules now Ive read them and hopefully this will answer some of the questions I have been asked and give you an idea what you will need to play .The rules are card cover and  colour through out and are a 112 pages long . They are a D6 set and it looks like you will need a few . Movement and ranges are in inches ,you will need a few counters although dedicated perspex couters are available there are no cut outs or downloadable ones available that I know of . There is apoints system but scenarios seem to be the way to go and there are anumber included .

The big thing with the rules are the skill level of troops going from level 0 which are civilians ,armed criminals etc upto level 12 who are the SAS, Delta types .The elite boys will wipe the floor with the lower level troop types unless you play them correctly and have sufficient numbers to out shoot the SAS and spetsnaz types. Commanders and leaders add bonuses and each level of fighter have traits which can help them out as well . Choosing the right equipment and dividing it out amongst your teams is crucial as well.

phase 2 =COMMAND PHASE , models pass a command roll to perform certain actions such as going into over watch  and calling in off table fire.


There are rules including for everything I can think of ,night vision equipment ,every type of weapon and ammo , civlians getting in the way ,all quite clearly explained and laid out .

Vehicles , these are intended to be things like technicals and special forces soft skins amd SUV's but basic rules for everything up to MBT's are in there as well .

I always like to know how many figures I am going to need and what size playing areas so looking at the included scenarios you will need:

1. US Rangers v Insurgents  a 3x3 foot table with 30 rangers and 48 insurgents of variuos kinds

2. MIlitia and Mercs v special forces again 3x3 but points based so forces will vary.

The trick is lots of scenary as well ,most of teh above scenarios have off table or air support which can be used without the actual models although a couple of little birds or blackhawks always look nice. 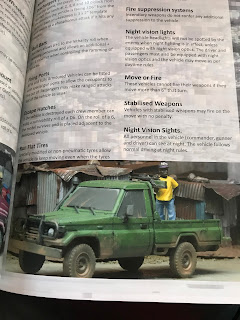 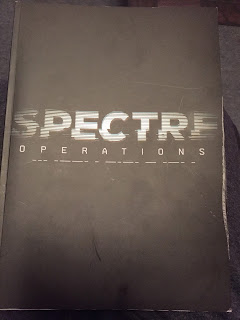 Posted by itchy's wargames at 13:00 No comments:

I purchased these newish special forces rules and a selection of figures just on an impulse and Im very impressed ,the rules are nicely laid out ,colourful ,easy to follow ,they come complete with a few scenarios at first glance they look like they will give agood skirmish game looks like the special forces need 6-10 figures and if using militia types as the bad guys you will need about 20-30 figures definatly a set of scenario led rules where you need clear objectives aand number of turns ..he figures are really nice with no flash or mould lines , all of them look the part ,the SAS types are very realistic poses and the militia even have the firing a ak47 over my head pose seen on news flashes from around the world . 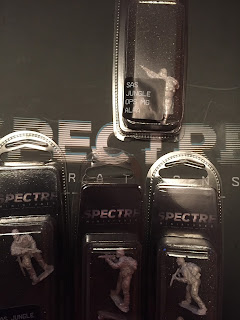 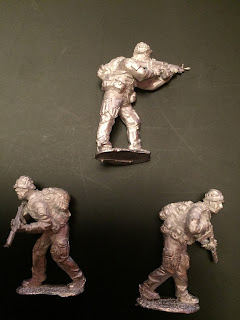 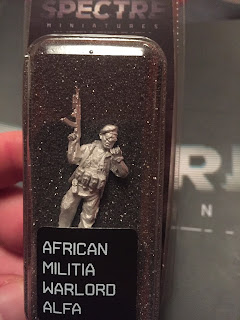 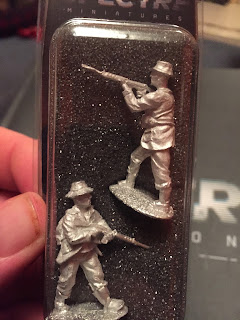 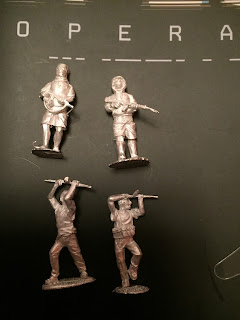 With some guts behind it ....some new books for my library 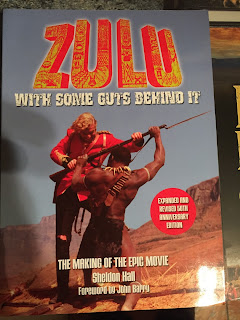 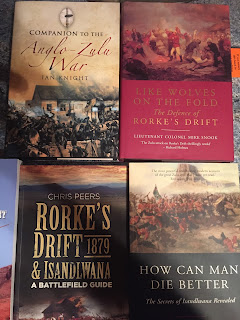 Made 5 piurchases to add to my Zulu war library ,the first is really about the famous movie rather that the actaul events but ive been after ZULU with some guts behind it ,by Stepehen Hall , for a while as it sold out almost straight away and the the pirates on evil bay started asking silly money (£1000 average for a book that retailed at about £30) so that was a no no for me then a recent re issue in paperback for £17 and im a happy chappy , a wonderful book containing facts and stories about the classic movie with hundreds of pictures from the film and from behind the scenes ,fantastic stuff. The other 4 are more striaght forward books , 2 by Mike Snook ,one on Isandlwana and the other on Rorkes drift started reading these and they seem very decent ,well written reads ,the next was a Ian Knight one that I have wanted a while ,the companion to the zulu war ,Ian is my favourite zulu war author .Finally chris peers battlefield guide not sure about this one but it was very cheap and has got loads of pics and has the word zulu in the title so its now on my shelf.
Posted by itchy's wargames at 07:10 No comments: