Finally finished all of the models I recieved in the Kick starter for the children of the fields casts by Crooked Dice for 7tv .

The latest attempt at 54mm bookcase miniature is a sergeant of the 24th at Isandlwana , he is depicted dragging a ammunition box and is very animated his rifle and water bouncing about as he attempts toresupply his men .Figure by Benito 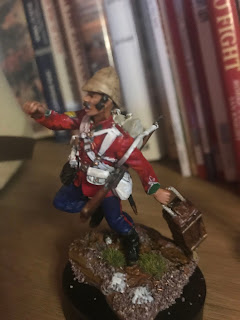 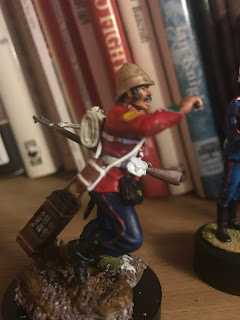 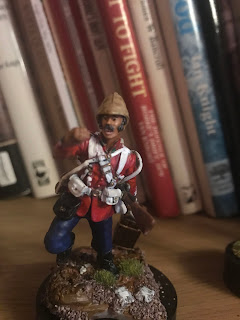 Posted by itchy's wargames at 11:05 No comments:


A quick 2 day trip to London allowed us to visit a few graves , we missed a lot due to shortage of  time but that gives  us an excuse to visit again .First stop was Chiswick for Fred Hitch VC , a well liked and Brave soldier he fought on with as severe wound ,his popularity continued after the war as his amazing grave stone shows a beutiful monument paid for by public subscription . 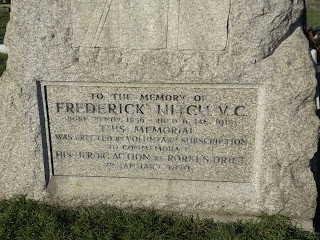 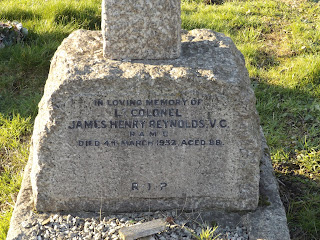 Our final visit of the day was to Ewell to see the grave of Colonel Richard Glyn of the 24th foot , requested the wagons at Ishandlwana were lagered but was over ruled by chelmsford and was ordered to accompany Chelmsford was missed the slaughter at the camp ,was involved in the second invasion as well .His grave is sadly overgrown and fenced off next to a old church tower ,by the time we arrived his was dusk so not the greatest photo . 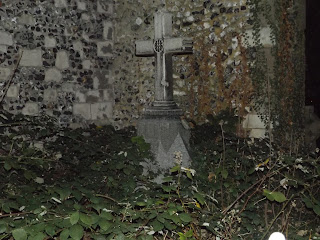 Day 2 allowed us to visit 2 Rorkes Drift heroes Gunner Arthur Howard RA and probably the most famous due to the excellent protrayal by Nigel Green n the movie Zulu ,although mainly wrong for example Frank was only 25 at the time of the battle ,its believed he turned down a VC for promotion he ended his carrer as a Lt Colonel he passed away on VE day 1945 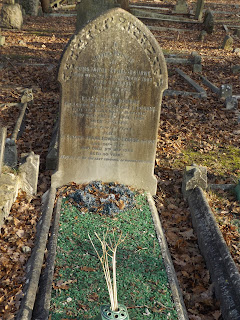 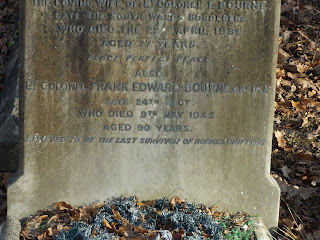 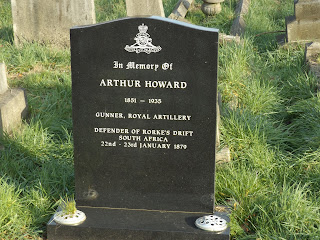 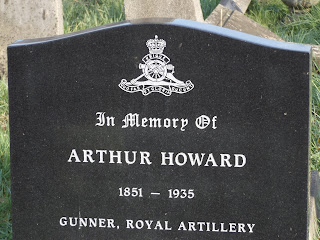 Last nights game at the club  was a 7tv scooby doo game ,two local crazies had been disguising them selves as monsters to keep people away from the old spooky graveyard whilst they prepared to summon real  monsters to take over the world .The gang and local sherrif turned up to stop this by finding 5 amulets hidden around the graveyard , the two locals cold try to summon a real monster each turn with the summoning getting harder as scooby & co found the amulets . The game started fairly well with Shaggy and scooby finding one of the evil icons and fred and daphne resuing the human sacrifice ,but soon went sour when magic was used to send Velma to the far side of the graveyard alone and the local police were taken out by the werewolf ....Things went from bad to worse with scooby and Fred both being taken out and shaggy and daphne both taking wounds the forces of evil win ...well until the next episode of scooby Doo (theme song plays )

Got a few more bits painted and based for various games , a knight templer and frost wraith plus some treasure for Frostgrave both figures Northstar figures , The black goat , little Lord Winterley and his side kick Mister Mangel for 7tv Children of the fields from crooked dice and finally a few animals for frostgrave but bases left plain so they can be used for anygame , a bear and 2 boars with 3 young piglets all from warbases. 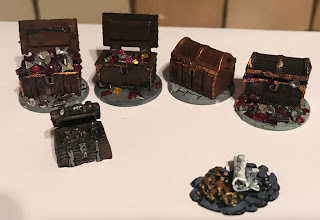 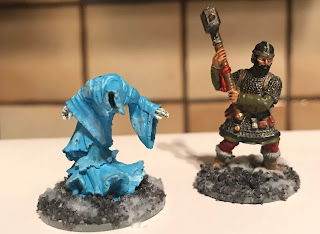 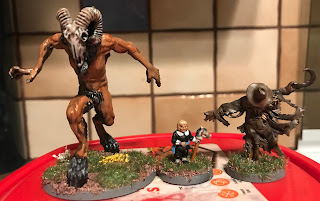 Posted by itchy's wargames at 09:06 No comments:

Another 54mm AZW figure to stand guard over my AZW library ,again a Benito figure but this time a trooper from the Durban Mounted Rifles ,a small unit but colourful ,when mustered in1878 they numbered 3 officers and 63 men ,they saw very little action acting mainly as scouts .

Posted by itchy's wargames at 04:42 No comments:

Battle of the Bulge -rules of Engagement style

A ROE scenario based in the Ardennes was played last night at the club , a vicious little battle using the Hold the Line Scenrio ,the US troops managed to stay hidden which meant the Germans had to advance almost to my lines before they could engage us , lots of firing then took place my medic performed some sterling work and my LMG made mincemeat of a Brave german unit which made a dash for my HQ . The Germans looked the likely winners until a round of bad saving rolls took them to their breakpoint when victory was in their grasp ,another cracking game ,my next army to get out and complete will be my late war US Airborne  "Currahee"...   Figures as usual a mix of warlord and artizan ,panther is a corgi die cast and trucks from any scale mat by Urbanmatz

Posted by itchy's wargames at 01:05 No comments:

A busy day painting , building and basing on the 1st day of the year gave me a  nice amount of wargaming goodness for at game at the club tonight ,again rules of engagement but this time the snow covered fields of Europe and the U.S infantry fighting those evil Nazis trying a sneak attack .Thought a Battle of the Bulge type scenario would be fun as at this time of year we always promise to take part in the battle of the belly bulge .My main infantry section was shown in my last post but much to my surprise (and hopefully my opponents ) I managed to build and paint 2 American vehicles a M10 and M8 ,I did both in a winter whitewash finish which I am quite chuffed with as its my first attempt at such a finish , the models were ok to build especially the M8 which was italeri it only took 30 mins to build, the M10 is warlord and as usual came with no instructions so had to trawl the internet to find some . I have also built and based a few plastic ruins from warlord games ,put them on pretty non descript bases ,hopefully representing burnt ground so they can pop up around the world in different time periods I have added little bits of rubble etc to the bases but not enough to stop figures being placed, also based a few winter trees I bought cheap on evil bay and finally 2 markers for Rules of Engagement to show how many hits the unit takes as the hits effect morale rather than the casualties so causing 10 hits but not actually killing anyone is devastating , the chaps on these are Blacktree designs , you dont need many as these as the effects are worked out at the end of each turn then the markers are removed . 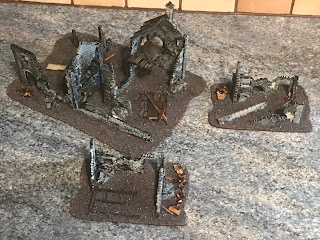 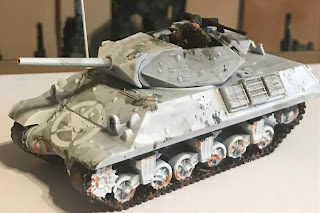 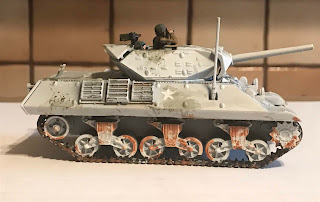 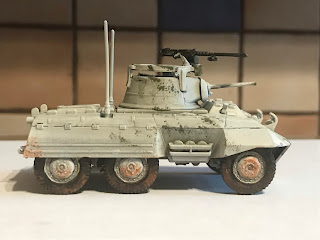 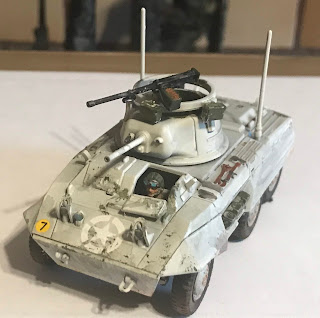 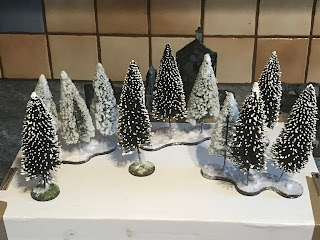 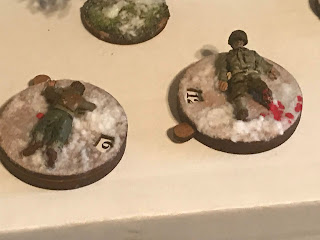 Posted by itchy's wargames at 02:52 No comments: