The churchyard of St John the Baptist, has many graves of service personnel, a fact that is not surprising given that the RAF Base at Scampton lies just over the road from the church. One thing that is surprising however is that the churchyard contains a number of graves of German war dead.. When all the German dead of the second world war were being collected up and re-interred in the large war cemetery in Cannock Chase the relatives of these men refused permission as the graves here are treated with the same respect and looked after in the same way as the British war dead.

No one seems to have any concrete proof of what happened to the 1945 crew but there were heavy raids on the night 3rd 4th March with Junkers 88's sneaking back in formations of Halifax Bombers and attacking them as they came in to land ,this crew were possibly aboard a Ju88 that was brought down in nearby Welton ?. 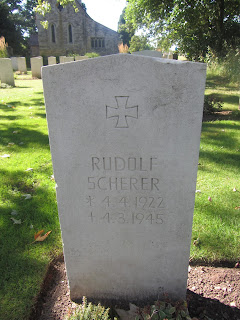 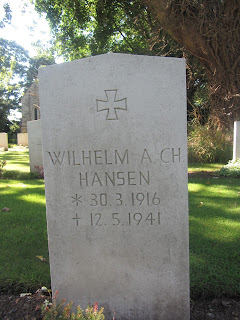 Also in the Church Yard is a small Rose Garden dedicated to Sergeant John Hannah A Hampden Crew member who was terribly burnt during a raid in 1940 the floor of the Hampton melted away due to the heat and the gunner jumped/fell through the floor ,the navigator went to find out  what was happening and saw the plane and Hannah well ablaze and bailed out expecting his pilot to follow ,however the pilot C.A Conner stayed in the plane .Hannah somehow managed to put the flames out on his body and although his hands and face were badly burnt he managed to use fire extinguisher's to put out most of the fires using his log books to beat out the remaining flames he then acted as navigator and Conner managed to bring the badly damaged plane home.Conner received the DFC and Hannah was awarded the VC for their brave actions Sadly Conner was killed a couple of weeks later  and although Hannah returned to the RAF on training duties he never fully recovered and was invalided out in 1942,and passed away in 1946.
Posted by itchy's wargames at 04:08 2 comments:

A couple of new blogs

My family seem to have caught blog fever ,my wonderful partner Elaine has started a blog which will cover our family and some of the wonderful places we get to visit http://welaines.blogspot.co.uk/   and my young son as started one as well covering his love of sport ,fast cars and military museums http://sportandtrnsport.blogspot.co.uk/  especially proud of young Stevens as he has Autism and him becoming involved in this blog is doing him the world of good ,hope you have a few minutes to pop along to both .
Posted by itchy's wargames at 05:25 No comments: 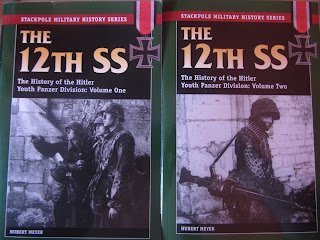 Recently picked up Both volumes of the History of the Hitler Youth Panzer Division for a bargain price of £18.00 for the pair from Amazon ,I have seen them on other on line shops for up to £24.00 each volume so I snatched them up and I am glad I did .They are by Hubert Meyer who was Chief of staff for the 12th SS ,both volumes are made up of reports and sections of diaries from all ranks of the division , all really well put together and keep you reading ,plus for the war gamer there are loads of scenario ideas .

Volume 1
This covers the reasons the division was put together ,the original plans and the reality of what was eventually to see battle,it covers the Battles on and  after D-Day including  the brutal battle for Caen and  up to August 1944 .The book is 580 pages long including some nice B&W photos some of which I have not seen before and some nice maps.

The second book covers the units regrouping after the invasion and the retreat through the Falaise pocket and the part the Division played in the Battle of the Bulge and after the war not only the soldiers time in captivity but also post war reunions and such like ,this book has the same quality of tables ,maps and photographs as the first volume and is 604 pages long .

Posted by itchy's wargames at 05:20 No comments: 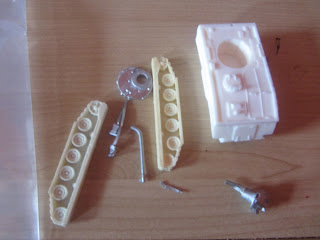 My latest additions to my BAOR for my force on force games , 2 very nice FV432's with peak turrets ,fitted together with no trouble and hopefully will get them painted this week .These are some of the latest models from S&S ,in my opinion the latest editions to the range ,which covers ww2 up to ultra modern are the best 20mm resin/metal kits available.

Ooops just been told the peak turret is not in production yet Ive been lucky enough to get the pre release .Out for general release soon . 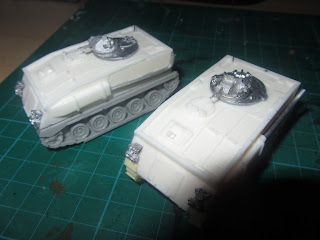 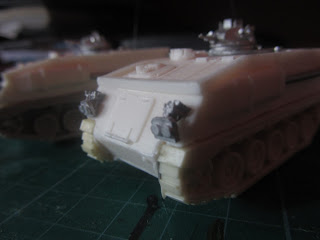 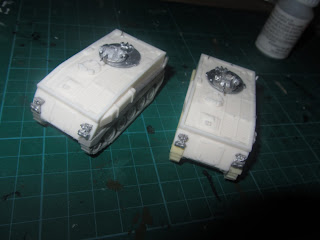 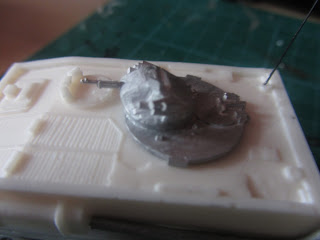 Posted by itchy's wargames at 09:07 No comments: