Built and painted the plastic boats that come with the starter of Warlord Games Cruel Seas game , I will look at the rules and the required changes  later but thought I would show the boats off first as Im pretty happy with them . 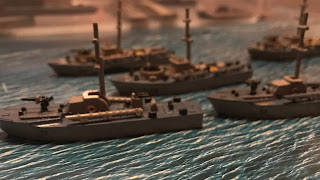 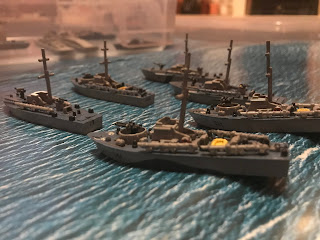 Posted by itchy's wargames at 14:30 No comments:

Partizan -has my opinion of shows changed

Ive not been to a wargames show for a while and had no intention of going to any more until I purchased some bits off a wargames forum and the seller offered to post or meet at Partizan ,so I thought a visit to partizan might make a nice change .I had a look on the Partizan website forprice and times it turned out the stated price was wrong .  On arrival there seemed to be bit of a mess with parking and some heated comments were being made ,with my previous career of event management I know that if you want to organise parking you need to have traffic marshalls on site and there were none for the wargames show but there were some organising things for another show in a nearby  building . Entry was pretty quick and I recieved a free figure which is a nice female which will fit into  any victorian era game although she is actually a german revolutionary ..Once inside we move around the show fairly easily I stopped at the wargames illustrated stand with the intention to buy a couple of their figures but a rather ignorant chap was stood in front of them talking to his mate , I asked if I could get through and he turned and stared at me then carried on has before ,so I tried reaching past him and each time I did he huffed and turned and gave me a dirty look ,eventually I gave in and told him what I thought of him and walked away without buying ,Im sure WI wont miss my tenner though . we had a look at another couple of stands but saw nothing to interest me ,long gone are the days of impluse buys and bags full of stuff I will never paint .I found the chap selling the items I mentioned and had a little chat before walking around the show ,The items purchased were Warlords Cruel Seas ,which I know had a really bad press due to the huge amount of mistakes in the rule book but these appear to have been corrected and David Manley has put out some great house rules which apparently make the game really good ,but the ships are really nice and I got them at afantastic price so Im happy . I purchased a single pack of figures from crooked dice as I do like to support Karl , the pack I bought I will actually use for Spectre operations rather than any 7tv games . My last purchase was some walls from the Tree Fellers ,these will appear in afew different games but are intended as aproper cattle krall for my Rorkes Drift games . John who went with me forced himself into buying afew items but after buying a very expensive sandwhich we both walked away from the show after an hour feeling let down, again gone are the days when I spent hours at a show and as we left chap who had just turned up was shouting about the parking chaos as a lot of people were leaving and were driving around trying to get out . The show seemed busy and there were quite a few nice looking games , a lot of the stalls we couldnt decide if the items they were selling were new or second hand ,the prices said new but the boxes said second hand ?also we noticed a lot of the doors had been opened by traders as ventilation and people were entering in large number and I only saw 1 trader a very galent elderly lady attempt to stop them . John said he wouldnt bother again and I have to agree .

There will be an awful row about this.......A Zulu Victory

We played our first proper game of Ospreys "the Men Who Would Be Kings " last night at Sheffield Wargames Society . I Umpired whilst Ian took the part of the British and John over saw the Zulu Impi  , we used the Run to the Hills scenarios ,with afew amendments for the AZW not in the main rule book . Ian had 3 British Regular units one with the sharpshooter trait and 2 NNC units ,Johns Impi consisted of 3 married and 3 unmarried regiments .Things got off to a bad start for the Brits with each unit rolling for thier leadership trait which consisted of Drunkards ,Brutal and Ugly leaders ,the Zulus faired a lot better .Surprisingly the first kills of the game came from a unit of NNC taking out 3 Zulus ,after that things went down hill quickly for the British with a lot of bad dice rolls and the Zulus making good use of the go to ground rule to get close to the red coats. The game only lasted 6 turns before the Zulus over ran the galent forces of Queen Victoria ,one unit of NNC fled the field but everyone else died to a man ,The Redcoats made a valient last stand and actually destroyed one regiment of Zulus before dying in a  good traditional victorian way . Overall we liked the rules we made a couple of adjustments on the night but good fun .Figures a mix of Warlord ,Perry,wargames factory and Empress mat by urbanmatz . 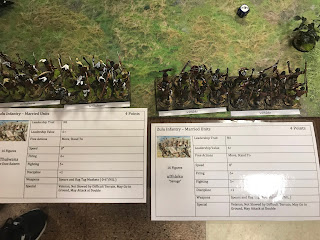 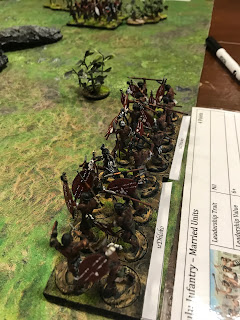 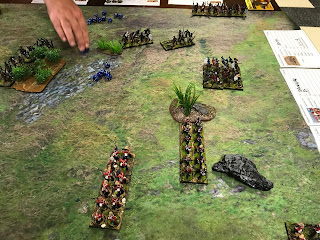 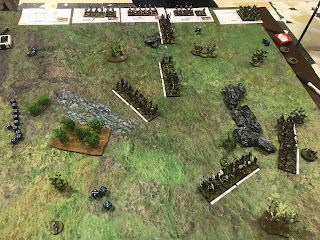 Posted by itchy's wargames at 23:24 No comments:

Painted up a few more 28mm bits for my AZW collection , a 7pdr gun and crew with a mounted officer looking at his watch and the Prince Imperial both these are from Empress Miniatures and 8 pinned markers 4 for each side these are plastic Perry miniatures mounted on warbases counters . 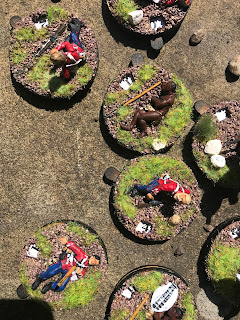 The men who would be kings -unit cards

Playing TMWWBK this week so made a few unit cards hopefully to speed things up ,each card contains the basic rules and required dice rolls for each unit .I have made acouple of adjustments to stats to better represent the AZW units with the Zulu cards I  included the regiment names to match up with my based units and included the English meanings of the names ,I was going to add more but thought I would try them and the game out before I started showing off too much .

Posted by itchy's wargames at 02:17 No comments:

Labels: the men who would be king, Zulu

At a very busy Sheffield wargames society last night we tried out these new rules from Great Escape ,they played well and we had to consult the rule book rearely after turn one .I fielded a mixed British and West German force and John brought the Russian masses .We didnt finish the game a very late start for us and as I said the club was busy so lots of people asking questions and saying hello but we did find out APC,s and the like died very easily but niether of us managed to kill an MBT only causing morale markers ,overall  a nice simple game we have already decided to change a couple of bits but the rules are written in a way that will easily allow the players to add anything without too much trouble

Posted by itchy's wargames at 00:27 No comments:

Finished some more of the models I got with the 7TV kickstarter ,this lot are my militia unit a mix of types but all have some yellow on them somewhere which gives them a little sense of being a unit .My favourite figue is the "threads" traffic warden from the old BBC drama  so in tribute I have called the Militia THE WARDENS . 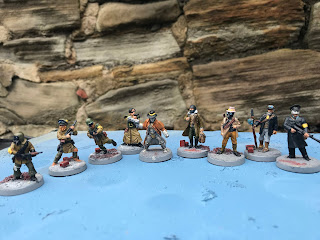 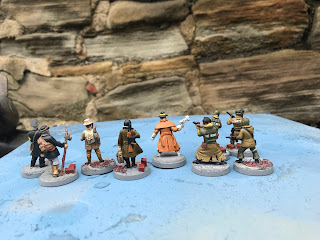 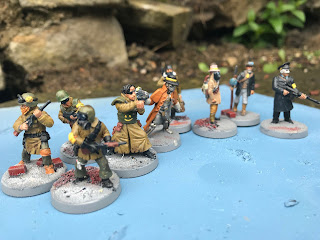 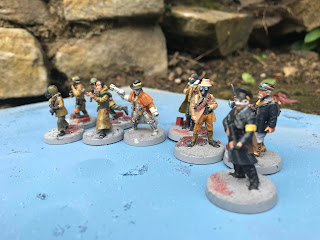 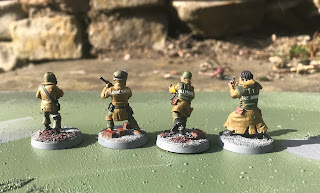 Posted by itchy's wargames at 06:16 No comments:

Apologies and how to make Zulu Huts

Firstly I want to thank everyone that has commented on my posts this year and then say sorry for not publishing and answering them ,I totally missed them all , I will check more often .Secondly a number of people asked about how I made the Zulu huts ,really easy is the answer my first attempt was using a coconut which I scooped all the nice bits out of a Ithen used asmall modelling saw to cut the door out of ,I managed to smash one half doing this , so thought about different ways then just by chance I found Lizard houses in Pets at Home for £3 each ,these are basically a half cocnut with the door shape already cut ,sadky they only seem to stock 1 at a time but on there website I discovered if you ordered 2 you git 1 at half price  , so 2 huts for £4.50 and it gets better if you have them sent to your local store you dont get charged P&P and it only took 3 days for them to arrive ,quicker than royal mail . I then stuck some extra thatching on cut from a witches broom from poundland ( for those who are bound to ask it a £1.) .There were a couple of holes where the eyes of the cocnut were ( not sure of correct term ) I put some PVA around the inside of the holes stuck some paper towels over it then covered them with basing sand when they had dried . Having seen Zulu Huts up close recently I sprayed the coco-huts (copy rite) with grey car primer then the lower half and around the doors with  a sand colour spray but only very lightly ,when dry I dry brushed light and dark grey over the surfaces and that was it .The lizard huts (coconuts) obviously come in slightly different sizes but this again matches the real things no 2 are exactly the same size. 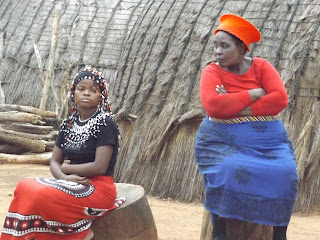 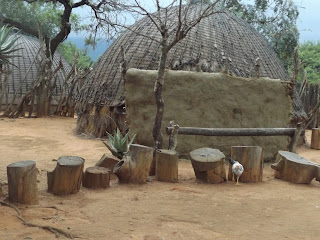 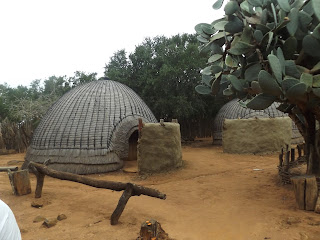 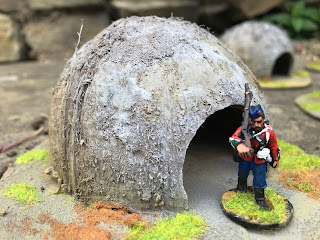