Marcin Gerkowicz the owner of assault Publishing as well as contributing a set of his new sic-fi rules PMC 2640 as a prize to my charity raffle as also kindly donated some of his range of 15mm figures for us to use in our charity games. The packs in his range are actually made by other manufacturers then re packed to suit his own rule set ,saying that the figures are really nice and can easily be used with any 15mm sic fi rule set such as tomorrows war .

The figures and vehicles are on his web site as APCR range which stands for Assault Publishing Choice repacks , a title that says every thing .I believe the actual ranges are from Odzal Osmy and Rebel mainly but Marcin will add to these as he expands the rules and army lists .

The figures he has kindly donated are packed in sets of 6 and 8 figures labelled as Rifle Infantry ,Light Infantry ,Engineers etc and are a random mix which usually contains a nco/leader figure and 2 or 3 basic troop types then a heavy weapon or 2 .The figures are nice and have crisp detail all of the poses are very good and realistic there are no strange men dancing with rifle poses here , they are white metal and have very thin bases cast on and hopefully I will get some painted over the next few days and they will be taking part in many charity fund raising games . The vehicles Marcin has donated are again very high quality and are a mix of white metal and resin ,you can tell Marcin has put a lot of thought and time into picking what goes in what pack and they are easy way to start a sic fi army .

Below are a few pictures of the figures straight from the bag and a size comparison against a critical mass figure the only other 15mm sic fi I have. 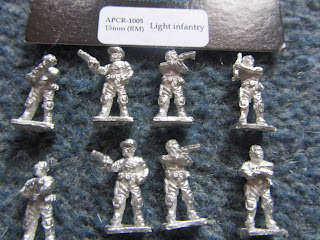 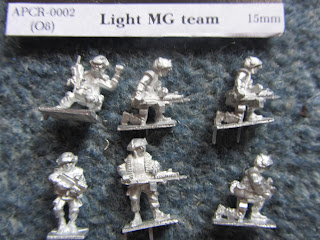 overall the range is a nice addition to the Sci Fi market allowing you to pick from ranges of figures on one site packed to make ready built units for the game.